As many of you already know, OLD BLUE is an iconic brand from the great Indonesian raw denim wave -born more than a decade ago now- inspired in vintage workwear and in mining. For its part, SAMURAI JEANS is a legend on the Japanese denim scene, always searching for the best and nothing but the best through materials, artisan garment-making techniques and unique detailing. Both brands have undertaken a very special denim collaboration -which will be available from Redcast next Friday 18th February- and we want to tell you a bit of the history behind it. 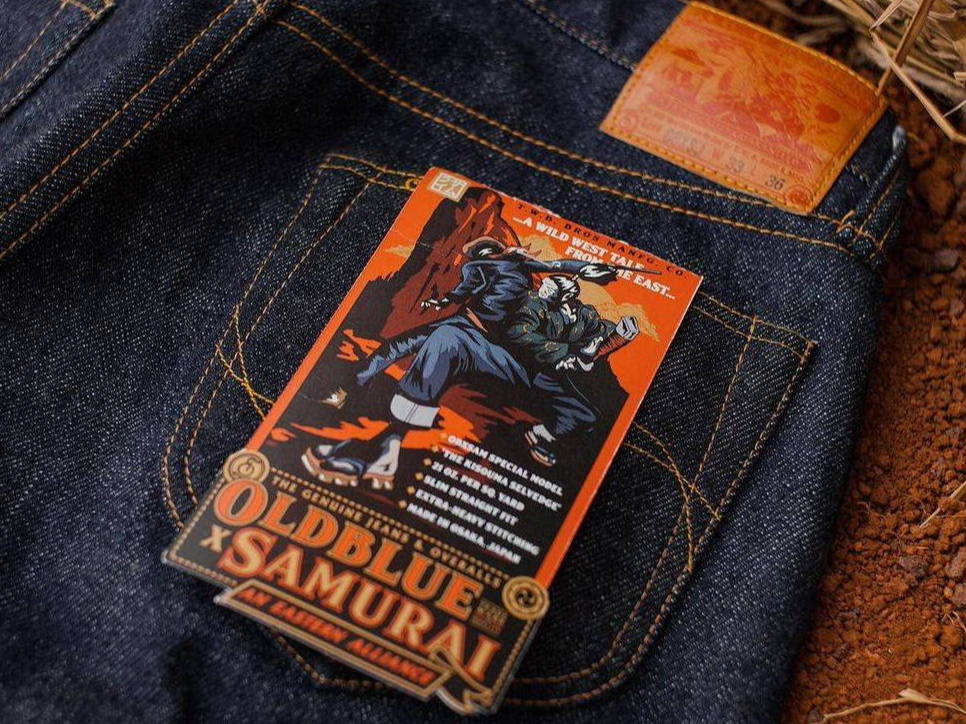 How did this collaboration arise?

As Old Blue tells it, Samurai Jeans was the one who contacted them through Instagram with the idea of doing something special together. Old Blue, who have been loyal followers and fans of the Japanese brand for years, did not hesitate to accept the proposal. As they say, they could not let this opportunity get away.

What did they want to represent with it?

Far from recreating a confrontation between the characters of each one of the brands, just like it’s often represented by Samurai Jeans on their patches, flashers, etc., with clashes between warriors, the spirit of this collab was to capture the union of both brands through a fight against a common enemy. It’s what they have called an "Eastern Alliance". This union can be seen in different details of the denim collaboration, as we will tell you below.

Which were the steps in creating the Old Blue x Samurai jeans?

According to them, the first thing Old Blue had to do was choose the denim fabric they wanted to work with in this collab. Not a simple decision, in fact the most complex one in the process given Samurai’s wonderful catalogue of selvedge denim.

Finally Old Blue decided to choose the Samurai signature 21oz fabric "Cho-kiwami" made in Okayama. This choice was not only due to the weight but also to the extra long staple cotton (40% Pima cotton and 60% Egyptian cotton), this combination producing a unique denim fabric. A heavyweight denim that will probably make the jeans last longer, not to mention the pleasurable sensation of wearing them thanks to the incredible cotton blend.

As for the cut selected for the collaboration with Samurai, Old Blue chose the S710. A versatile cut that can adapt to all body types. 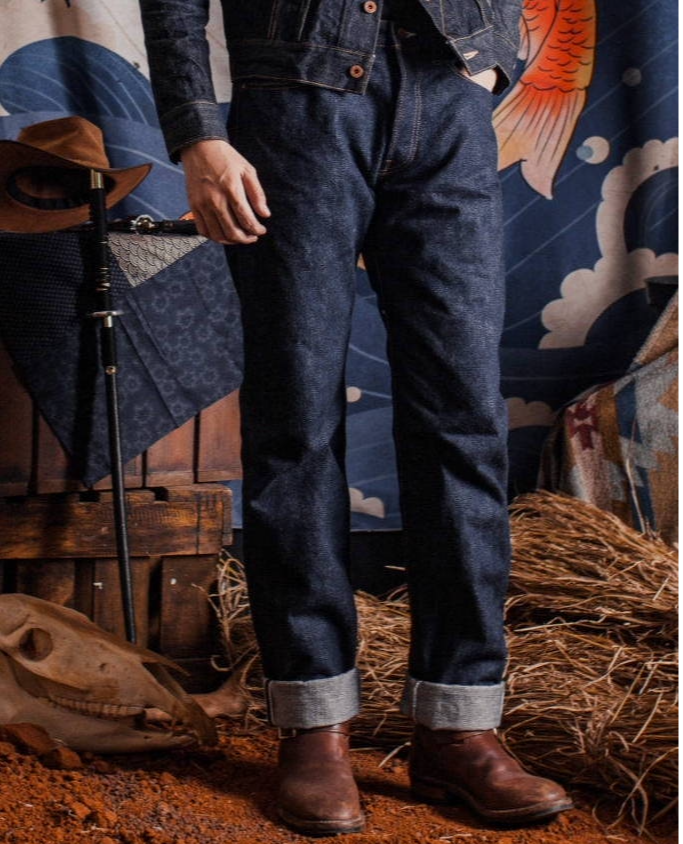 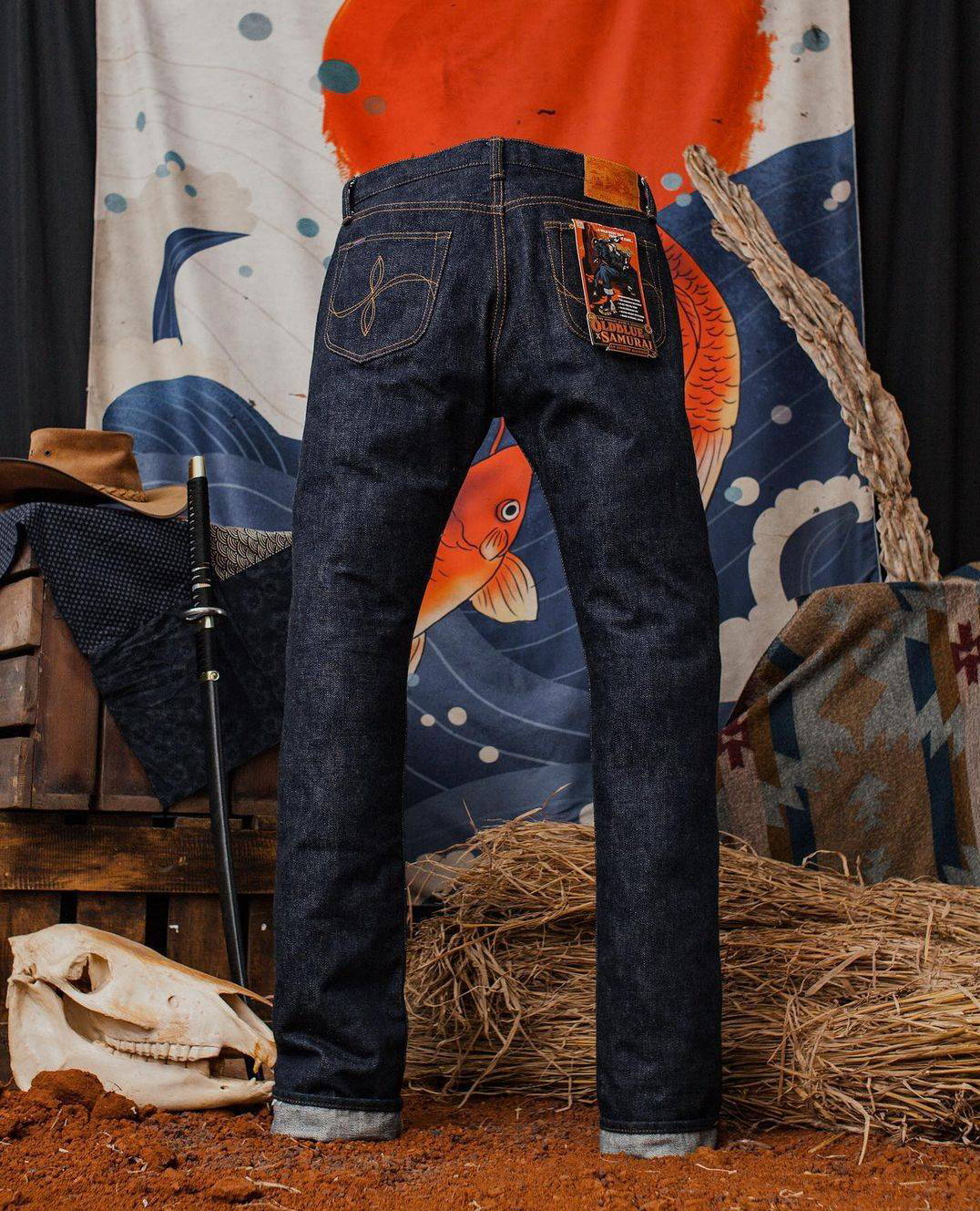 And what about the details?

The most prominent detail on the denim is the back pocket, one of the key pieces in the collab denim. On one hand, the shape of the back pocket does not take the usual form of Samurai jean pockets, nor does the arc. For the arc they took inspiration in Samurai's Yamato arc and incorporated it into Old Blue’s own arc: the “Double Looped” arc with the double-row stitching type. The result is simply wonderful, with both brands featured in the back pocket. 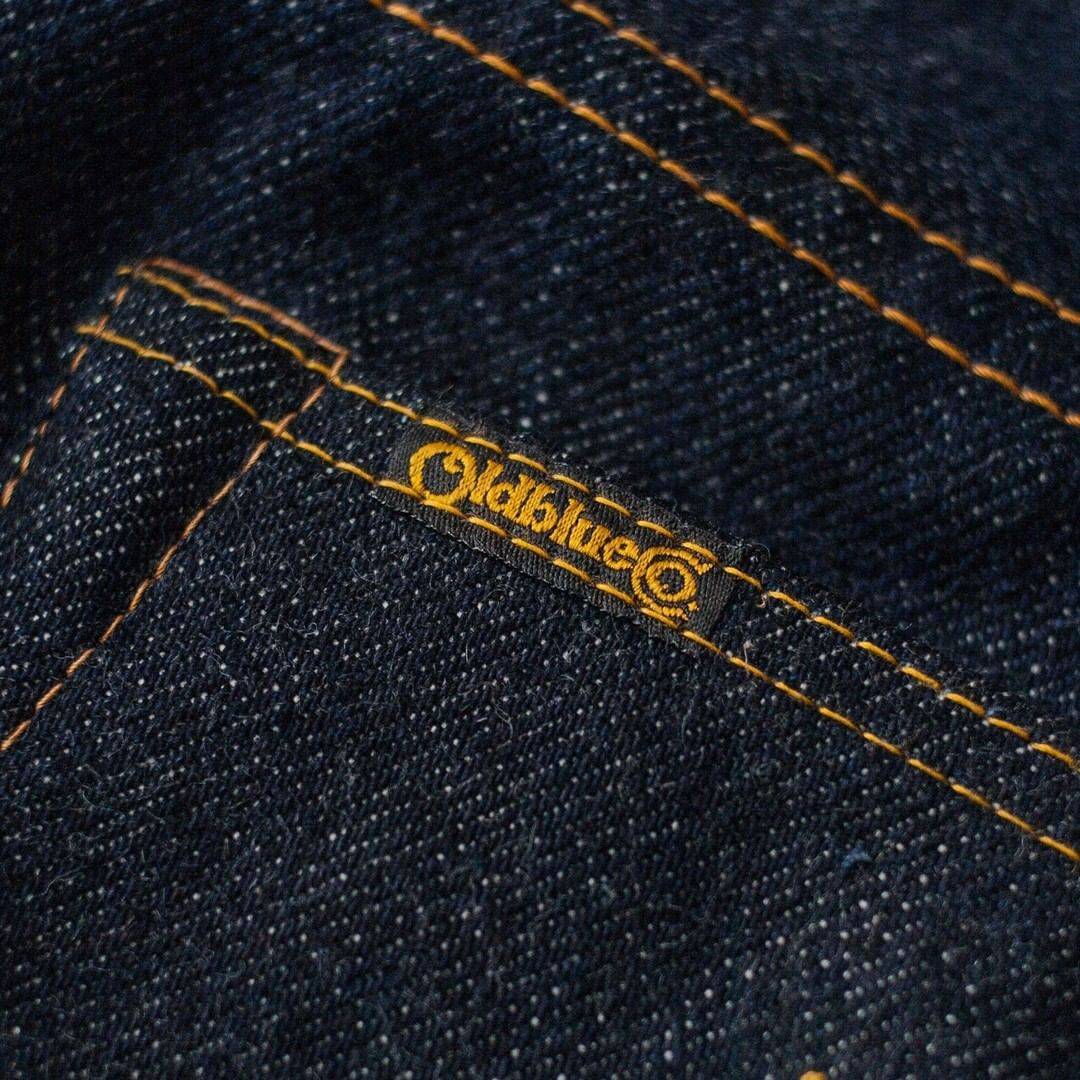 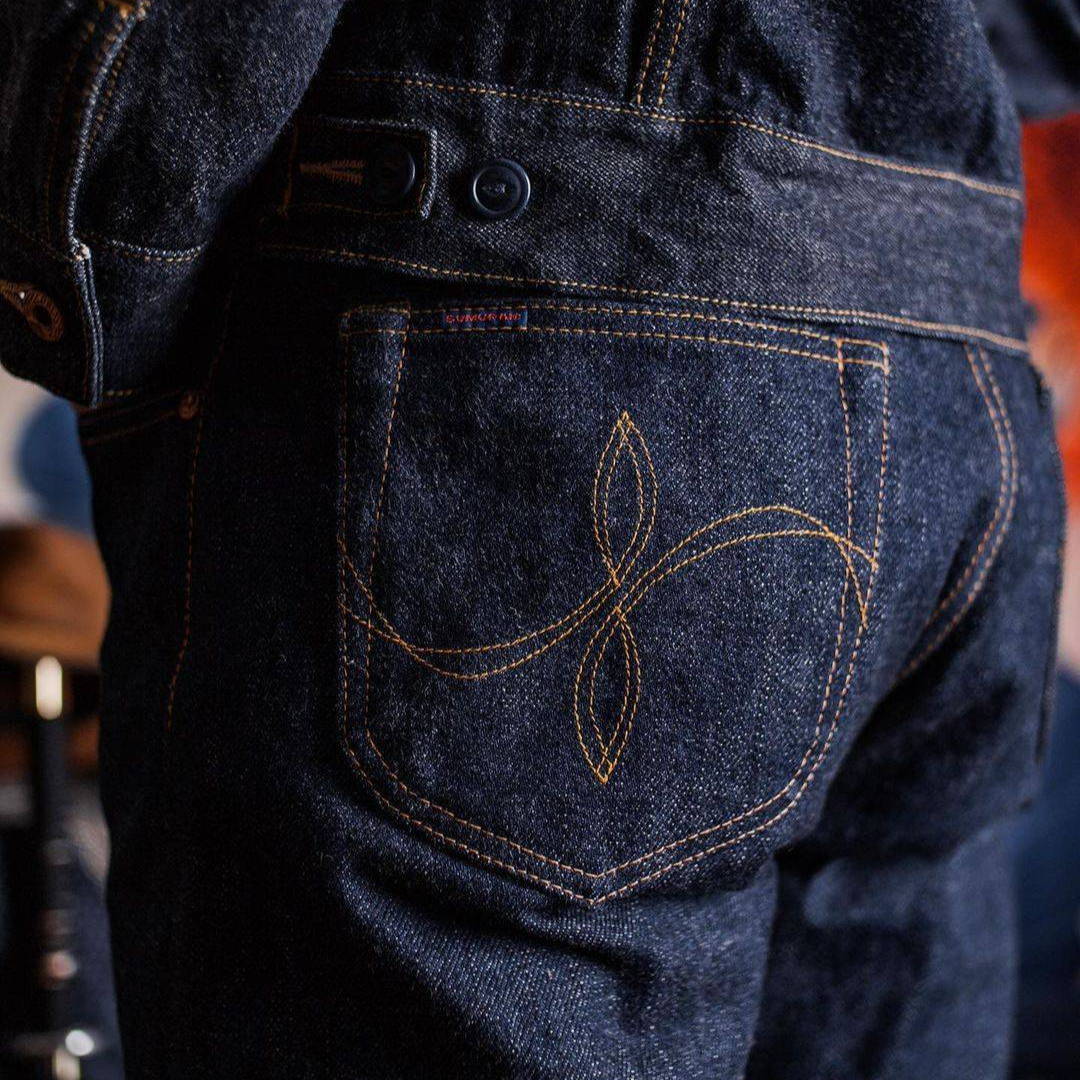 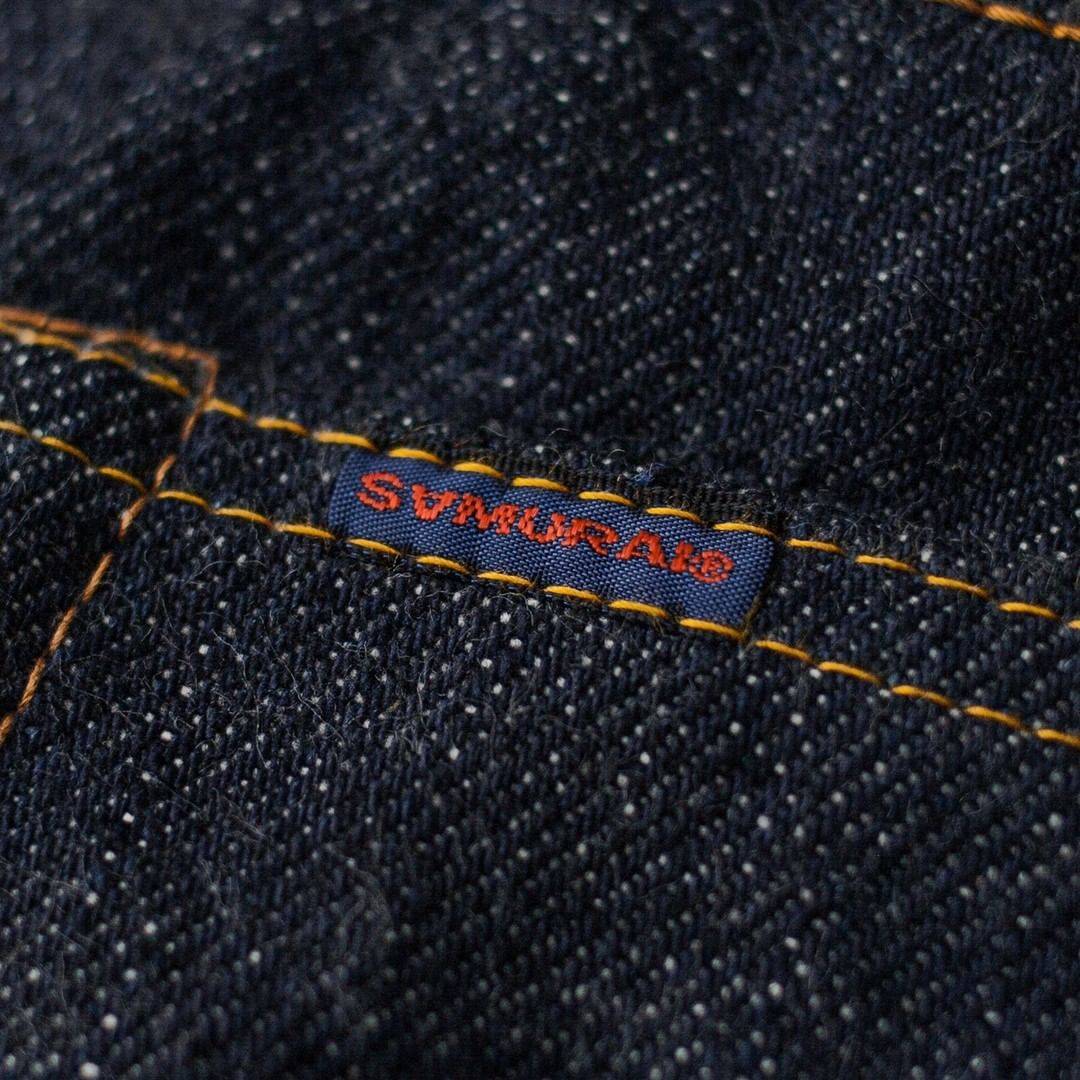 Another unique detail of this collab is the leather patch. The characters of both brands -Old Blue’s Lone Ranger Cowboy and the Samurai of Samurai Jeans- are shown united, fighting side by side against a common enemy. Furthermore, the patch is made from one of the emblematic materials used in Samurai leather patches: sheepskin.

A third detail created exclusively for this denim collab is the label stitched into the waistband. For this they took inspiration from vintage Lee labels. 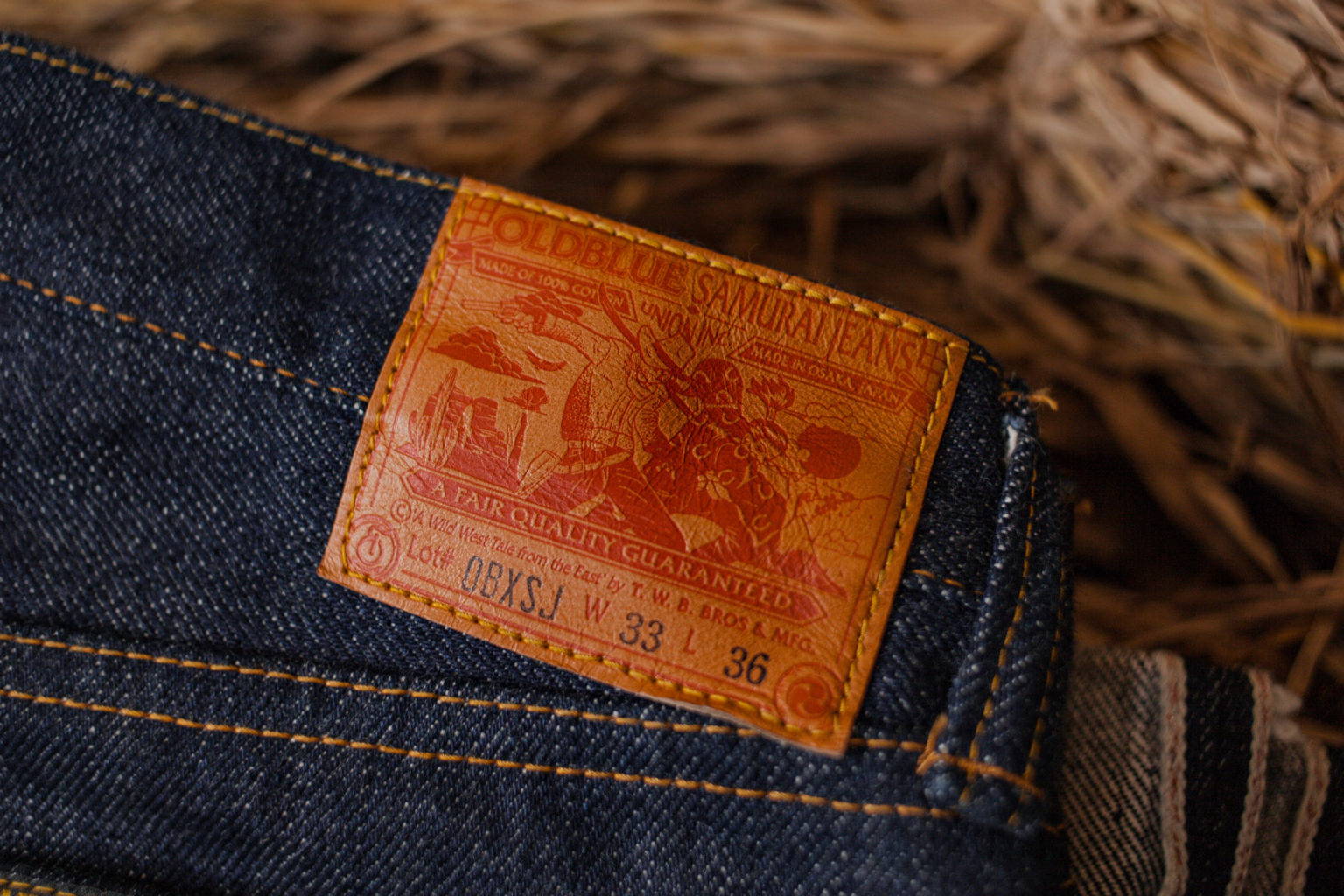 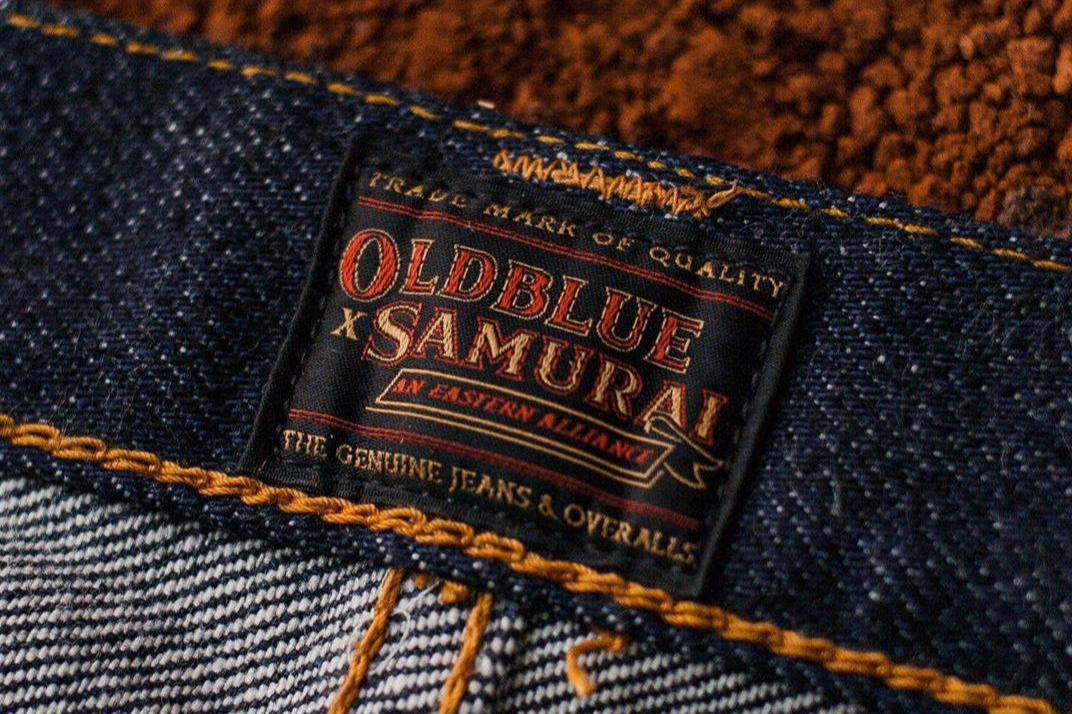 Lastly we should emphasize that these jeans are made not only from Samurai 21oz denim but also from Old Blue’s most representative denim: 21/23oz “Beast” denim. You must be wondering: where? Well, this fantastic combination of denims is to be found in the coin pocket. While at first glance it is very similar to the Samurai denim, you will notice a difference in the indigo hues of the coin pocket and the rest of the denim fabric. Plus Old Blue has put its characteristic “Looped Stitch” on the coin pocket.

But you will also find the Old Blue 21/23oz “Beast” denim in the right-hand back pocket as well as the brand tab, with this pocket truly representing the character of the Indonesian firm.

As well as in the denim, these jeans also display the merging of both brands in the hardware trim (take a look at their buttons and rivets). 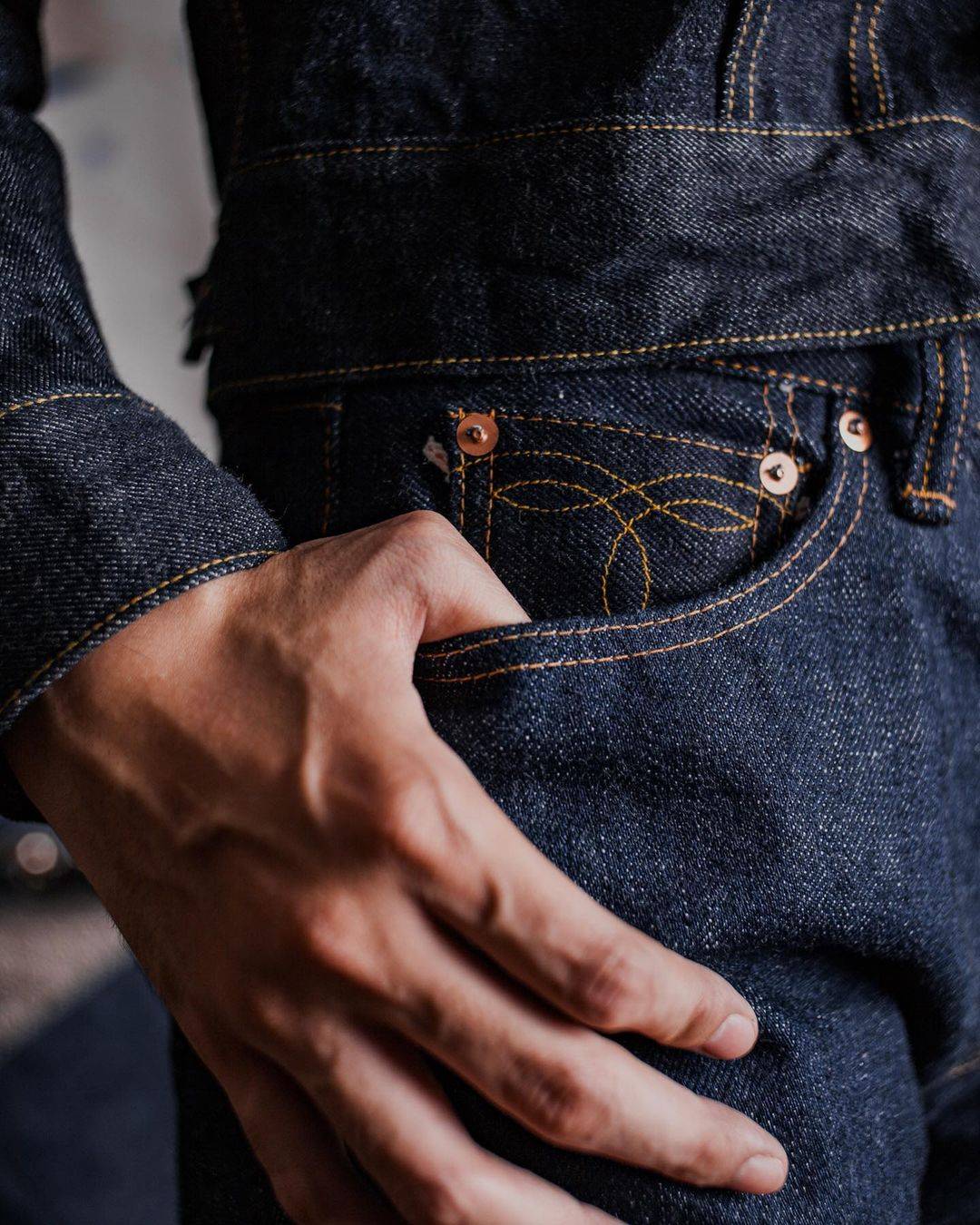 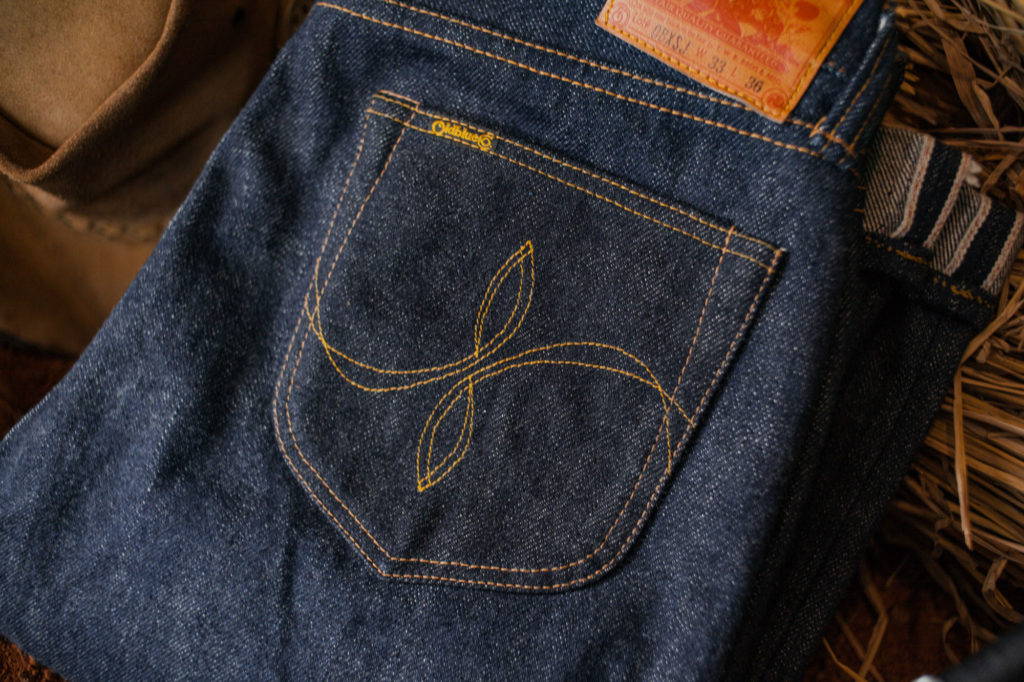 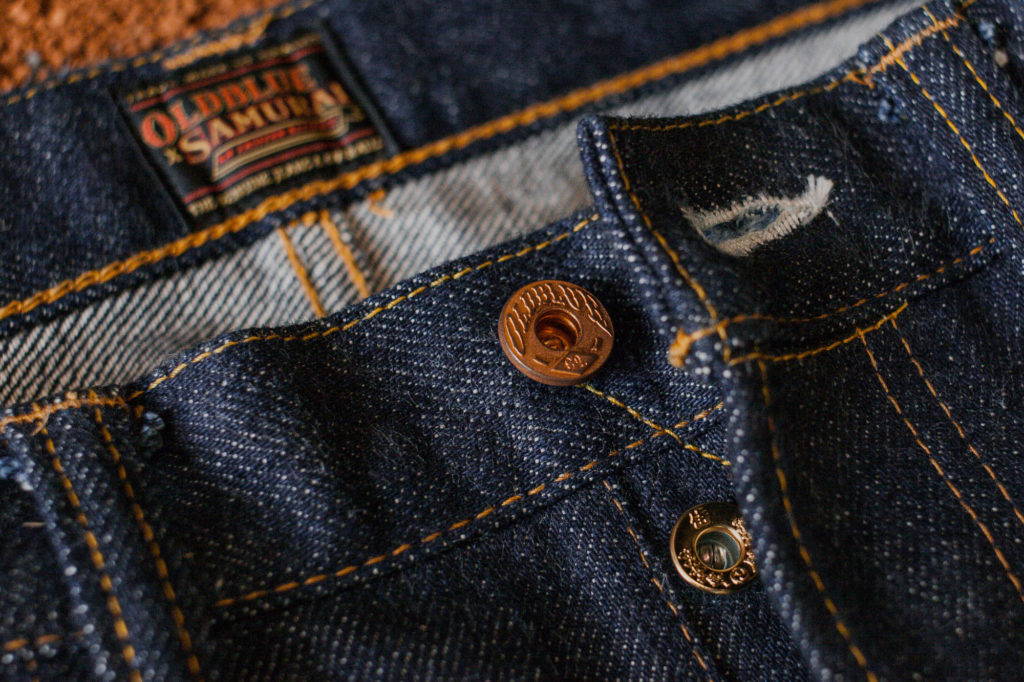 Pocket flasher: not one but two designs. Why?

Once again they are seeking to represent the spirit of the collaboration we spoke about at the start while wanting to distinguish this one from other past collabs. 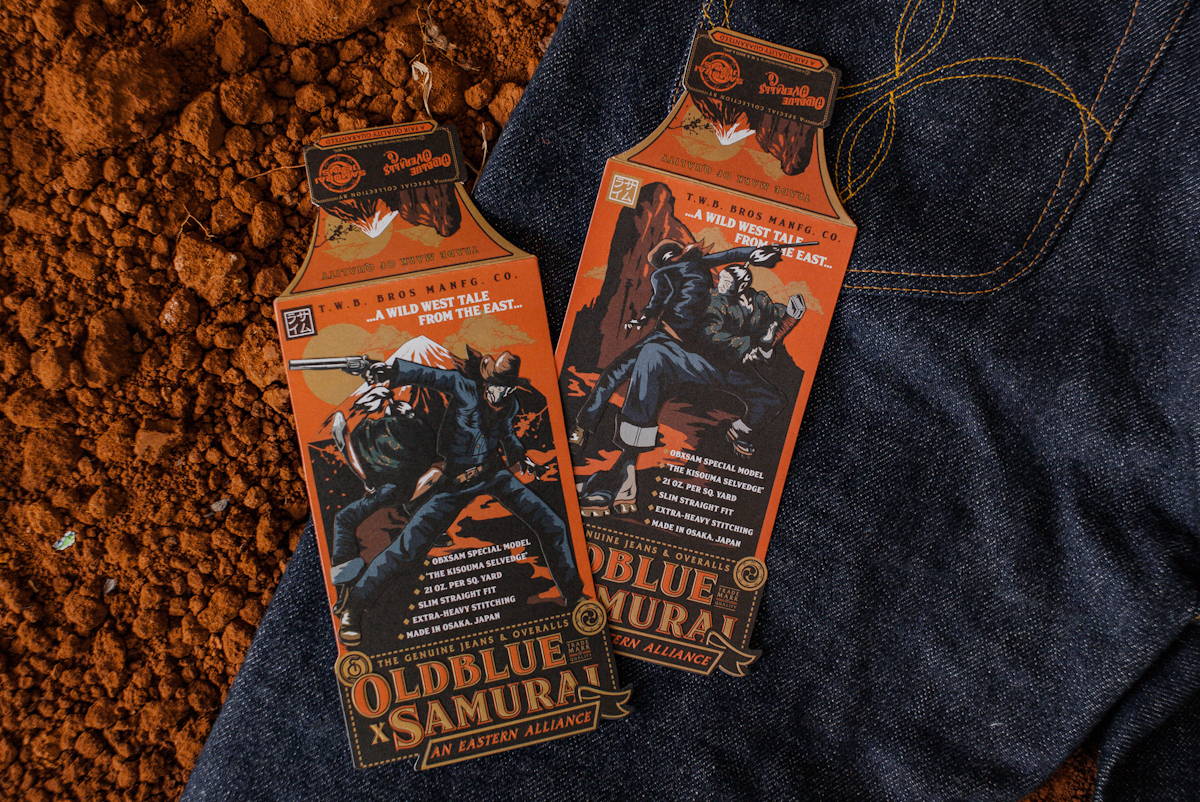 And the most important bit … Where to get your hands on such a unique and special denim collaboration?

Very simple, on our website from next Friday 18th February. Stay tuned and don’t miss out on the opportunity to get hold of a pair!